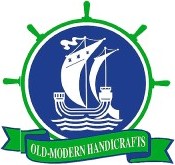 
This is the 1935 Messerschmitt BF 109 Fighter Scale Model by Old Modern Handicrafts
The Messerschmitt Bf-109 was the dominant fighter during the opening stages of World War II and was the most produced German fighter of the war. It received many upgrades to its frame and armaments throughout its service. 109's saw action in the Battle for Britain, North Africa campaign, Operation Barbarossa, the Spanish Civil war, and many others. This model is based off the most popular 109 the E variants and features the paint of the G series flown over North Africa. Features of this model include a rotating prop, mock wing cannons, full tin construction, and rotating gears. The model is one-twentieth the scale of the actual plane and is an excellent choice for placing on a table, shelf, or countertop.